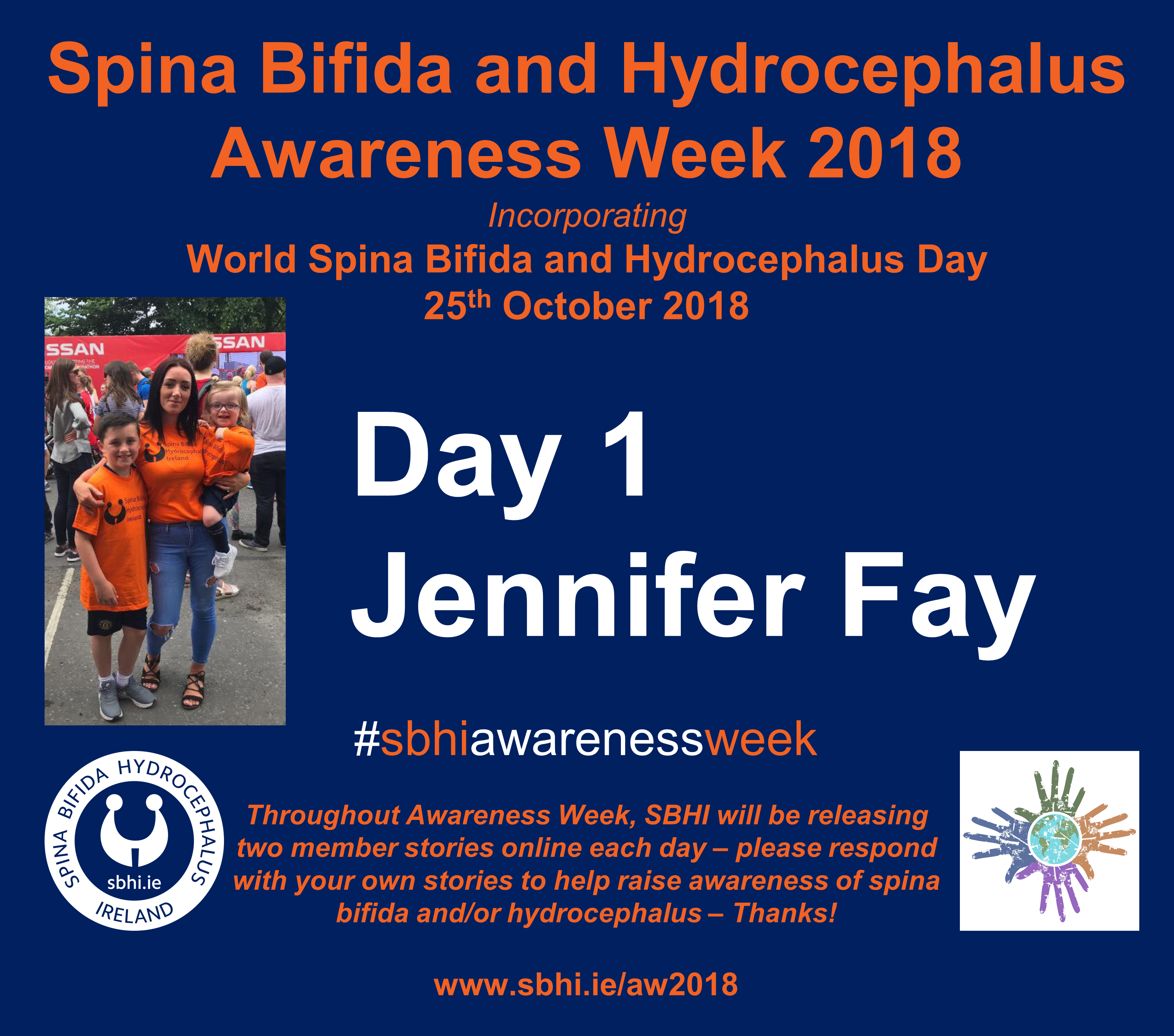 “I know that Rosie has a disability and is not the same as other kids who do not have a disability, however she will learn things in her own way and in her own time.

“To us, Rosie is amazing, she is a fighter. When she was a baby I would never have thought that she could live a ‘normal’ life. Now I know she will do well and go on to achieve great things.”

So, says Jennifer Fay from Dublin, speaking about her daughter Rosie, aged two, who lives with hydrocephalus. Rosie was quite ill as a baby and scans taken when she was a few months old confirmed that she has hydrocephalus.

Rosie began to make huge progress after her shunt revision surgery, she is now both walking and talking and attends a Montessori school for two hours each day!

“Life is much better now. I still worry about Rosie and her future and I have nights where I cry my eyes out,” says Jennifer.

“But I have to get out of bed the next day because if my children see me falling, they will fall – I have to be strong for them.

“I am very lucky to have Rosie and my son, Jack who is nine. I come from a big family – I have 11 brothers and sisters and my mam Deborah – and I get a lot of support from them which is great.”

Rosie was born in July 2016 and became quite sick at the end of November 2016. Jennifer thought she had a vomiting bug and brought her into Crumlin Hospital.

“I was one of those mothers who thought ‘my child is perfect, don’t point out anything negative to me about my child’. While I never noticed anything about Rosie’s head being swollen, others in the family did but they were afraid to say anything to me,” recalls Jennifer.

“Rosie would just lie in her cot not moving much, it was like her body was jelly. As there was a seven-year gap between my two children, I suppose I had forgotten what babies and their developmental stages were like.

“They did a head scan of Rosie in Crumlin Hospital and the next day I went in on my own and I was told that Rosie had hydrocephalus. I was distraught, I had never heard the word ‘hydrocephalus’ before, I could not even pronounce it.

“I thought it meant Rosie was dying and I was in total shock for a number of hours. I tried to calm down and got a nurse to explain hydrocephalus to me in more detail.”

Rosie remained in hospital for three weeks as she picked up several infections including pneumonia and a gastro bug.

“She was just lying there with wires coming out of her and I found it very hard, I got very depressed during that time.

“Then a neurosurgeon from Temple Street Hospital came in and what he had to tell me was a bit more positive. He did not want to insert a shunt in Rosie straight away but wished to take time to monitor her.”

Rosie came home from hospital for Christmas 2016 with the date set for her shunt surgery on 27th January 2017. However, in early January, Rosie began to deteriorate again, she was unable to lift her head.

Jennifer brought her back into hospital and the shunt surgery took place on 16th January. There were immediate improvements in Rosie’s health, she began moving her arms and legs and eating well.

“After the shunt surgery, Rosie continued to pick up every bug that was going and she stopped sleeping. She screamed her way through the night and was always crying,” says Jennifer.

“In April 2018, I noticed that her head had increased in size, her eyes were swelling, and she was getting sick. She slept for two days solid, so I called an ambulance and she was taken into Temple Street.

“The doctors took some fluid from her shunt and we were sent home. Jack made his Communion that May and after the Communion, I felt we were back to square one as Rosie’s head was increasing in size and I felt that shunt revision surgery was required.

“Rosie eventually had the shunt revision surgery and she has really been doing amazingly well ever since.

“She still does not sleep very well but I can cope with that. She is terrified of hospitals and frets whenever we have an appointment, however, once we leave she is grand.

“Rosie knows that she has a shunt and I talk to her about her shunt. The mistake I made was not realising that Rosie’s illnesses and all her complications with the hydrocephalus and shunt surgery etc. was having a huge impact on Jack.

“I kept the full impact of Rosie’s hospital stays from Jack, but he knew something was going on and he got very upset and was very anxious. He went through a terrible time but thankfully in the last four months he has come out of it and is much happier.

“Jack adores Rosie and is always protecting her – he won’t even let me give out to her.”

Jennifer admits that she was really traumatised by the news when Rosie was six months that she would never walk or talk. She says that it took a long time to get her ‘head around it’.

Once she came to terms with the possibility that her baby may never walk or talk, Jennifer says that she decided to try and treat Rosie the exact same as a child without any disability.

“I started pushing Rosie and encouraging her to walk.”

As the months went by, Jennifer noticed Rosie’s strength and her arm and leg movements improving. Shortly after her first birthday, Rosie began speaking a few words.

Jennifer then took Jack and Rosie on a holiday to Wexford and noticed Rosie starting to move around on her bottom and trying to pull herself up to a standing position by leaning on furniture.

“She kept falling down. I bought her a doll and a doll’s pram and one day she just started walking pushing the doll in the pram.”

“Jack and I just started screaming hysterically and Rosie fell down onto her bottom on the floor and started clapping – it was an amazing moment,” recalls Jennifer.

“Rosie’s balance was very bad, and she continued to fall over when she would walk but I always told her to pick herself up and forced myself to not rush over to her to lift her up.”

Despite the high of Rosie beating her prognosis by learning how to walk and talk, Jennifer continued to worry about the impact living with hydrocephalus would have on Rosie’s future.

“I know that Rosie is very clever, and I can see her going a long way, however, the worry is there. She is starting already to forget words that she has learned – she knew all her colours but currently is forgetting the word pink. So, I do worry about her future in case things deteriorate for her.”

Jennifer got involved with Spina Bifida Hydrocephalus Ireland through one of the organisation’s charity partners, Stephen Martin of the Marathon Man to Ironman Challenge.

“I know Stephen and one day a post about his fundraising for SBHI came up on my Facebook news feed, so I got in touch with him and he told me all about SBHI as I did not know there was a national organisation for people with spina bifida and hydrocephalus,” says Jennifer.

“He has been amazing to us and I thank him everyday for all he is doing not just for SBHI but for Rosie too.

“His Marathon Man to Ironman Family Fun Run in Corkagh Park at the end of June brought our families together with more than 30 of us taking part and it showed how much support Rosie has from her family – all thanks to SBHI and Stephen Martin!”

In the last few months, following an introduction to SBHI member Louise Larkin, an adult living and incredibly productive and busy life with hydrocephalus, Jennifer has much more positive outlook.

“I got chatting to Louise at the Marathon Man to Ironman Corkagh Park Family Fun Run for SBHI at the end of June and then I bumped into her some time later in a McDonald’s in Dublin,” says Jennifer.

“Louise is the most positive person I have come across in my whole life. I used to think that Rosie would never have any friends or mix socially. Now after getting to know Louise, how socially active she is, and how she has done so much in her life so far, I know that Rosie will go far in life.

“I just want Rosie to live her best life, to her best potential and I will do my best to get her as far as I can – I will take inspiration from Louise Larkin.”