I really believe that knowledge is power 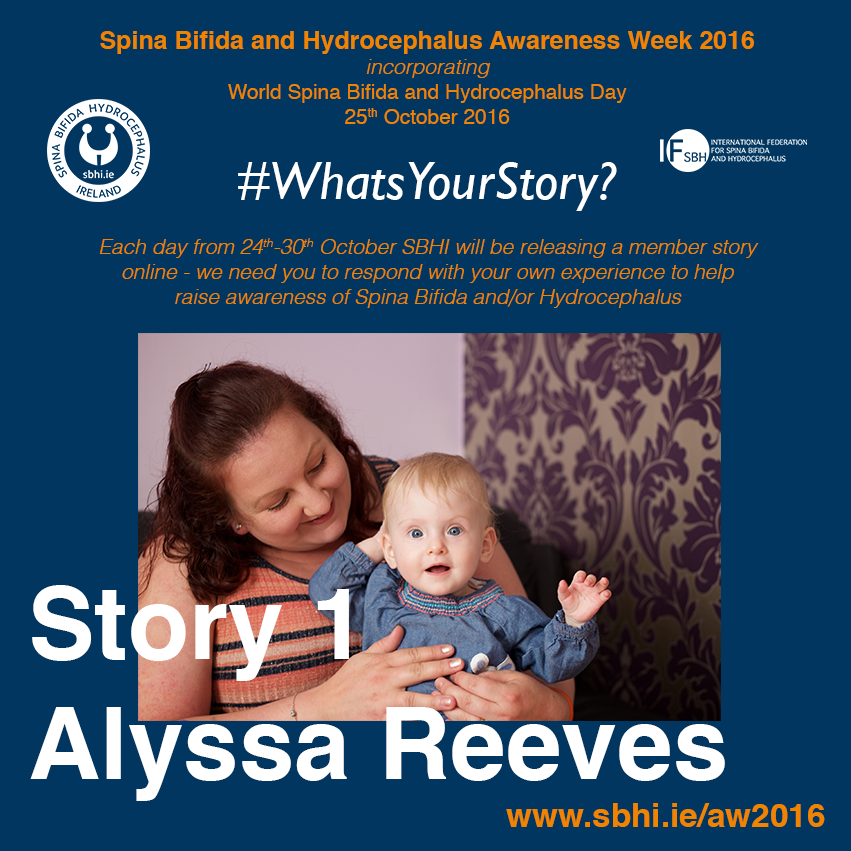 When first time expectant mother Amanda Reeves received the diagnosis at 20 weeks pregnant that her baby girl, Alyssa, would have Spina Bifida and Hydrocephalus, she cried her eyes out for days.

It felt, naturally, like a shock, particularly as Amanda and her husband Keith had been trying to become parents for four years. In fact, the wonderful news that she was pregnant, came just two weeks before they were due to go ahead with IVF treatment.

“Due to a thyroid problem, I was at a high risk of miscarriage but I was delighted that all was going well, that is until we received the diagnosis of Spina Bifida and Hydrocephalus,” says Amanda, who lives in Clane, Co. Kildare.

“I had done everything right. I had followed all the medical advice. I was even taking Folic acid for the four years I was trying to get pregnant - I really hate it when people ask me was I not taking folic acid.”

“I really believe that knowledge is power. There are a lot of big medical words used and when the doctors say them, if you do not know them, they throw you. When you understand the words, it is not as scary,” says Amanda.

“I tried to find out as much as I could; I got in touch with SBHI’s Family Support Team and I joined the Parents’ group on Facebook and got great support from them,” says Amanda.

“I was scanned every month, I met the neurosurgeon in Temple Street to have an idea of what to expect, so I think I prepared myself.

“Having the diagnosis beforehand was very good as it allowed me time. Some parents of Spina Bifida and/or Hydrocephalus babies who only find out after the birth, find it a little bit harder.

“I was able to plan and prepare for my maternity and I knew exactly what would happen. I found out everything about EVD, the lesion, how long Alyssa would be in hospital, catheterisation, etc.

“I had myself mentally prepared. Everyone was expecting me to breakdown and be a mess but it was what I expected, so I was okay with it,” she says.

“I knew Alyssa was going to be taken away from me to have surgery and the staff in the Rotunda were just brilliant; they sent a nurse in a taxi with me to Temple Street and I had a half hour visit with Alyssa before she went in for her surgery.

“They came with me by taxi the next day as well and by day three, they said I was well enough to take the taxi to Temple Street by myself.

“I think it is all harder on the Dads when the child is born. I was in the Rotunda just after an emergency section and Alyssa was in Temple Street. So, who did Keith go to? He was over and back between the two hospitals and he had loads of paperwork to do. It was really very stressful and I do not know how he did it.

“My mum, Divina - who lives around the corner from me -  and sister, Jennifer have been a huge support, I would be lost without them, they have been hands on, learning about the shunt, and catheterisation. I had great supports from the beginning from the Facebook page, SBHI, and the Kildare branch.”

Alyssa arrived 10 days early, eight-and-a-half months ago, by emergency caesarean section in the Rotunda Hospital. She was born at 5.30pm and by 8.30pm she was in Temple Street Hospital and she had her spinal closure surgery carried out the following day.

“She had an EVD measuring the fluid on her brain but we were sent home without shunt surgery. A week later we were back in hospital as her wound opened and she had to be re-stitched,” says Amanda.

“At eight weeks, Alyssa had to have shunt surgery as her head had grown massively and she was having seizures. She has been doing great since the shunt surgery.

“I bring her swimming twice a week, to Waterbabies and the Enable pool in Naas.

At the start she was not moving her legs in the water, but she is now starting to move her legs and feet. The doctors reckon she will walk but they never really know.”

Like all parents, Amanda worries about her child’s future and she knows that Alyssa’s conditions will bring problems.

“I do worry about things like will she walk? Then if she walks, will she break bones? Will she be bullied? The shunt is another worry because at any point it could go,” she says.

However, Amanda’s positive outlook means she is envisioning a future for Alyssa where she has no serious health problems and she attends a mainstream school.

Does the Reeves story resonate with you? What has your experience taught you? Feel free to add your story here as part of Awareness Week