Problems with access will not hold determined Eddie back 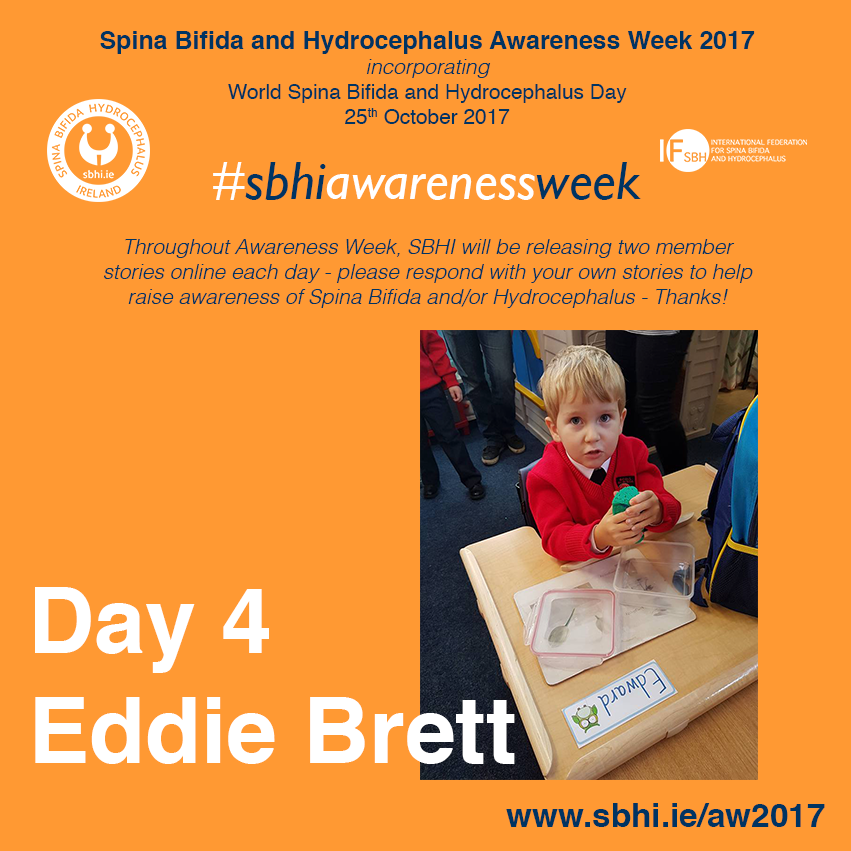 Access to brilliant healthcare helped Eddie Brett, who was born with spina bifida, defy the odds and reach the developmental milestones his parents Adrian and Lisa were told he never would.

“The doctors told me that Eddie would never be a ‘normal baby’; that he would not roll over, sit up, crawl, or stand up,” says Lisa.

He defied the odds on everything. Looking at the milestones of my other children Naima (10) and Evan (7) and comparing them with Eddie, he was only about two to three months behind them.

“He did everything, he rolled over, he sat up, he crawled, tried to stand up and I firmly believe it was down to the treatment he got from Enable Ireland in Naas, Co. Kildare. And the ongoing weekly treatment he is getting in First Steps, Patrick’s well Limerick.

“Eddie got the regular and brilliant treatment that he needed so young. Access to healthcare helped him defy the odds as it loosened his limbs and straightened his legs - without it I do not think we would be where we are today.”

However, when Eddie turned one, he was transferred into the public system in his home town of Monasterevin. Lisa says that everything went downhill because the physiotherapy staff were not given enough resources to give Eddie the regular physiotherapy he required.

Lisa has been driving Eddie to Limerick for private physio sessions for the past few years and she says that once again he is making great progress without first steps he wouldn't be where he is today.

“Eddie had surgery on his feet in January and can no longer use the Hip knee ankle foot orthosis (HKAFO) that he had. We are waiting on new ones so hopefully when he gets them he will be able to walk again.

“It has been a setback but we will battle on and we will get there.”

Eddie started in mainstream primary school in Monasterevin last month with Scoil Eimhin Naofa principal, Declan Costello ensuring that every effort was made to ensure the school building was fully accessible.

“Eddie absolutely loves school which took me by surprise as I thought he would be apprehensive but not a bother on him,” says Lisa.

“The school has been amazing. Declan Costello had ramps built over the summer so Eddie can access his class through the same entrance as the rest of his class mates. And he has a wonderful SNA in Clare Newman, who is actually a family friend.

“His teacher asked if anything needed to be adapted in class for Eddie and I told her that only if he is finding something difficult to make it a bit easier for him as he needs to be challenged.

Last month (Eddie not only started Stage School and loved every second of it unsurprisingly as he is a major showman), Eddie also followed in his big sister’s footsteps by joining the Leah Moran stage school in Newbridge.

“He was dead excited as he loves performing and I am expecting him to turn into a diva!

“Hopefully Eddie will do everything he wants to do. Nothing will hold him back, he is the most positive and determined little fella I know.

“I know he is only four but he has met every challenge and bowled it over and that is what I see going forward,” says Lisa.

“Adrian and I have never treated him any differently, even though he is in a wheelchair we have never molly coddled him and treated him the very same as his sister and brother.

“The world will never change for him, he has to change for it. The world is never going to change for anyone with a disability, they have to adapt and try to live in a world that is not okay for them.

“I know that Eddie will not be held back by any problems with access in his life, he has always been positive.

“There was a raised saddle on the door into his classroom which the principal was concerned about so we went down over the summer to see if it would be a problem.

“Eddie wheeled up the new ramp no problem, he did get stuck on the door saddle but he just did a wheelie right over it!

“He is so determined.”