Take advantage of educational supports and just go for it! 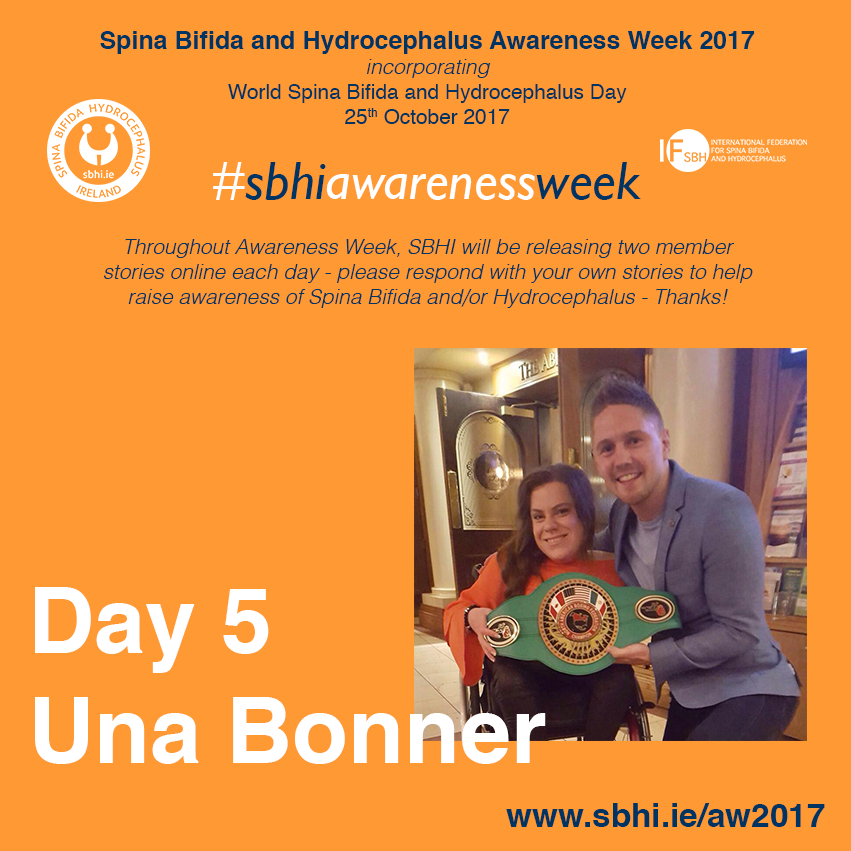 During her secondary school years Una Bonner knew that as a wheelchair user, she would be somewhat restricted in the career choices she could chase.

Fortunately for her, she was not frustrated by this but able to accept it as the career she was interested in – secretarial work – was open to her to pursue.

Having successfully completed her Leaving Certificate in Rosses Community School in Dungloe, Co. Donegal, Una, who lives with spina bifida, was accepted onto a degree course in Administration and IT in Letterkenny IT.

Three years later, Una, now aged 22, has attained her degree, passing her exams in May, and will graduate in October.

Securing a place on a Community Employment Scheme (CES), Una is now working in Dungloe Hospital where she is dealing with queries from staff and the public and carrying out IT duties.

“I am enjoying the job. The work is going really well for me. The hospital is accessible for me as my office is on the ground floor and there are really good toilet facilities,” says Una.

“I am really happy with this work at the moment; the hospital is in Dungloe which is close to home in Burtonport. I work 10am to 2pm Monday to Thursday and 10am to 1.30pm on Fridays, so if I could get full-time hours I would be quite happy.

“I have also applied to the HSE for a position but I have not heard back from them yet. The HSE is currently recruiting nationwide.

“I understand that the Minister for Disabilities, Finian McGrath, TD has proposed that the percentage of people with disabilites placed in employment is to be raised from 3% to 6%. I do hope that commitment is carried through.

“I was always interested in secretarial work and because of that I was able to accept the limitations being a wheelchair user placed on career choices,” she continued.

“However, I would have found it much more frustrating.”

Una, the youngest in a family of three children, has two older brothers Patrick and Sean, is the daughter of Denis and Agnes Bonner. Her dad’s twin brother is former Irish international soccer legend Packie Bonner.

Her whole family is delighted that Una has secured a job she is enjoying and very proud of her academic achievement – her graduation day will be a great milestone celebration for all the Bonners.

Because of her positive experiences in college, Una says that she would advise anyone with a disability, who is hesitant of going on to third level education or fearful of a particular career choice, to just go for it.

“There is loads of help and support out there and I would advise people with disabilities to take advantage of them. You just have to avail of this help and make people aware that you need help and support.

“Letterkenny IT is a very good and accessible college – the lecture halls had steps down to the top of the hall but I just sat at the back and that was not a problem.

“The college has a disability officer, so I got loads of help and had no problems. The students were all very nice. There was a small group on my course, we all got on very well. All my classmates were very good to me, so I had no issues.

“I found people in college and throughout my schooling years very helpful and very willing to help. I had SNAs in school and in college I had a PA who was a fantastic help and support to me.”

Una’s college PA organised a taxi each day to bring her from home to college, took notes for her in class, and assisted her in getting from one lecture hall to the next one.

“The help is there if you just go for it.”