There are no obstacles only challenges 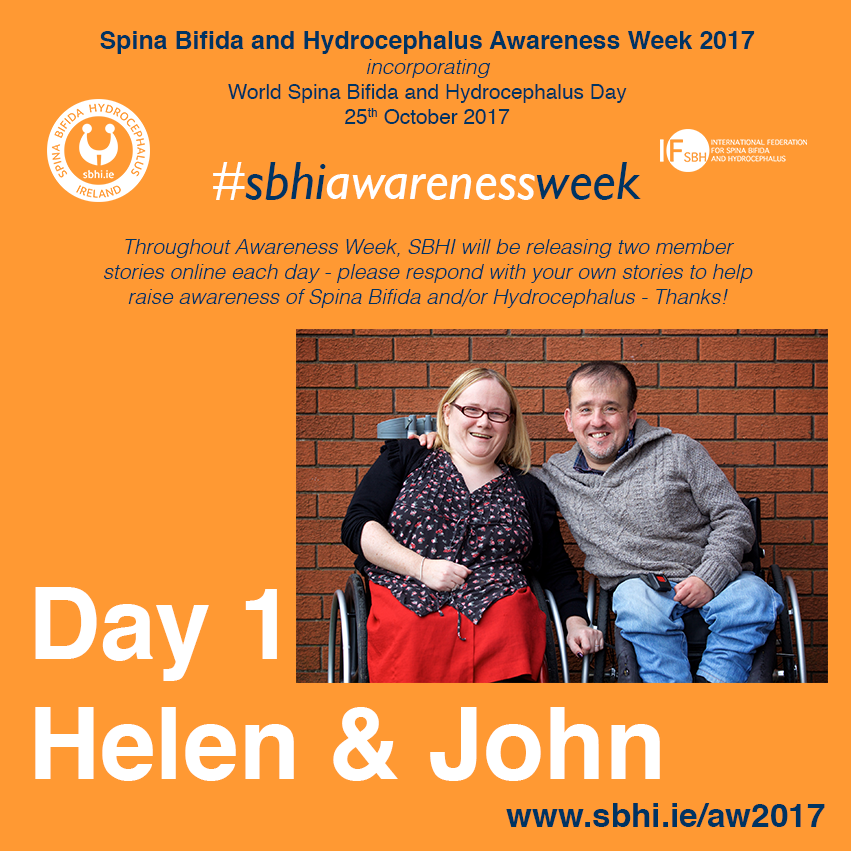 ‘There are no obstacles, only challenges’. This is the mantra that SBHI Youth & Respite Co-ordinator Helen Riney lives by.

Helen has been presented with challenges over the past two years, however, she has faced them together with her fiancé John Williams. And, thanks to their combined determination, this couple is now preparing to move into their first home together.

Like hundreds of couples around the country planning to get married, they took on the stressful task of trying to buy a house together in an Irish property market where demand is currently far outstripping supply.

Unlike most other couples, Helen and John faced the additional challenge, as wheelchair users, of having to find an accessible home or one which could be easily adapted to their needs.

“We were very positive about it from the very beginning, we did not want to let anything stand in our way,” says Helen.

“When we got engaged and were planning to get married, we knew that we had to be living independently together.”

“We just wanted the same as everyone else,” added John.

“We were very determined and positive the whole way through, not going to give up,” says Helen.

John is a first-time buyer and, apart from a very short-lived experience, has never lived independently away from his family home.

“I moved out to IWA independent living apartments in Clontarf in 2008. It was a disaster and I only lasted one week,” he says candidly.

“However, for me, living independently was a disaster on so many levels: I had not prepared myself and I did not even have a proper bowel routine in place.

“So, I went home. Then, thanks to this amazing woman (Helen) I decided to give it (independent living) a go again.”

For John, asking Helen to marry him in December 2015 was the first step towards gaining his independence and it was, he says, a mixture of fear and excitement.

Helen has been living independently since her college days and bought her own apartment a number of years ago.

“I lived on my college campus in north Dublin for three years. I was going home at weekends to my parents’ home in south Dublin, but gradually I extended my time on the college campus, as I did not want to go home as much!

“For my third year Erasmus, I went to Germany for a year – that was a real kick in the backside - doing everything for yourself from self-care, personal care to washing and cooking.

“I was not relying on anyone else, I did not have that option, but it shows what can be done with having the motivation to change.”

When John and Helen commenced their property search, Helen admits to being initially negative as she was not approved for mortgage protection on her apartment and she feared this would be the same with a house.

However, as her apartment had some accessibility issues, including a lift which kept breaking down, it was not practical for her and John to stay there, so the house hunting had to start.

“The mortgage broker we engaged was brilliant. He was very positive but also very honest about our expectations and the reality of our medical difficulties. He did a lot of work on mortgage protection for us,” she says.

“I got a waiver on mortgage protection and Helen was approved for it. The main obstacle is about how disability is seen. We both have spina bifida and it is seen as a life limiting condition,” adds John.

John and Helen looked at “tons” of houses and eventually settled on a dormer bungalow in Naas. Their offer led to some negotiation, which Helen says was stressful as they had to retain a budget to make the house accessible.

“Eventually, we met in the middle over the price. The elderly couple selling, wanted us to have their house because they felt it would be a nice neighbourhood for us to live in,” says Helen.

“However, once our offer was agreed, the estate agents started exerting a lot of pressure on us to get our paperwork and money sorted, so we got a solicitor to deal with them on our behalf - we would have been lost without that solicitor.

“We used mainstream companies and specialist companies to get the accessibility work done which included a new accessible kitchen, two adapted bathrooms, and a new wet room.”

Contact was made with the local authority on John and Helen’s behalf in relation to the possibility of them getting a housing adaptation grant. They were informed, through that contact, that they would definitely not get a grant due to their combined income being over the threshold and that there was no point in them applying.

“We thought that was unfair to be assessed jointly as individually we would have qualified and not having the grant put us under more financial pressure,” says Helen.

“Then we could not get a stair lift to suit both our needs, we tried everyone going, so we had to go for a through floor lift at twice the price.

“As we had no adaptation grant, we did have to get some financial assistance from our families to buy a second hand through floor lift.”

Now, that Helen and John are hoping to move into their new home at the end of October, they feel that overall the house purchasing process has been a positive one for them.

“We knew where we wanted to be living, we knew we are getting married, so we have to live together,” says Helen

“I think that there are a lot more obstacles for people with disabilities, nothing is straightforward, but it has been worth it as we want to be independent. We still have the same goals as we had at the start of this process.

“We never got to the stage where we said it is not worth it or we wanted to halt it.”

John admits that he has done a lot of growing up since deciding to get married and live independently.

“It is all about breaking ties, moving out of my childhood home and living with Helen. While we will have backup and help, it will not be available to us 24/7, so we will have to get on with doing things for ourselves.”

Both John and Helen agree that a key aspect to both of them living independently, maintaining careers and being able to move out of Dublin to Naas was being able to drive and having their own cars.

“Still, it will be a big transition to independent living together in terms of doing everything together: we will work hard together at being patient with each other!

“For me it has been a change of mindset from being cared for to doing things for myself – I got a nudge from Helen! I started counselling and it is making me grow up. I am dealing with a lot of stuff in my personal life and in transitioning to living together with Helen.

“I have been self-catheterising since I was seven or eight but my bowel care was a complete mess. I did not have a life, I was constantly worried and stressed if I went out and about.”

“Yes, for John that change in mindset was that little last thing to self-reliance. We all have to work at independence and learn how to not depend on others,” says Helen.

“For me, it was all about breaking the dependency chain and I am so glad that I have.”